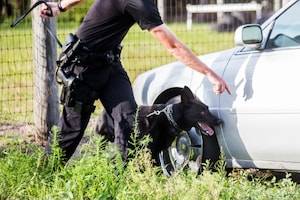 Both the U.S. Supreme Court and the Illinois Supreme Court have heard cases pertaining to the constitutionality of using drug-sniffing dogs during traffic stops. In a rather notable case that made its way to the Illinois Supreme Court, Illinois v. Caballes established that the use of a drug-sniffing dog during an Illinois traffic stop is not a violation of a person’s Fourth Amendment rights. The court stated that this is permissible because police dogs are only trained to detect the presence of illegal substances, in which citizens do not have legitimate privacy interests.

However, the court also stated that the only way the use of a drug-sniffing dog is legal is if the handler and the dog can complete their duties in a reasonable amount of time. Police cannot hold individuals at traffic stops for any longer than the amount of time it takes to reasonably complete normal traffic stop procedures.

Dogs are some of the most loyal and hardworking service animals, and their precise sense of smell has proven to be helpful in detecting illegal substances, but their use may not always be legal. If you are facing drug charges because of a drug-sniffing dog during an Illinois traffic stop, you should speak to a Rolling Meadows, IL drug charges defense lawyer right away. Scott F. Anderson, Attorney at Law has more than 20 years of experience defending clients against many types of crimes, including drug charges. To schedule a free consultation, call our office today at 847-253-3400.