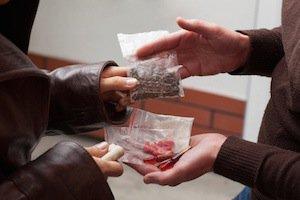 Hallucinogenic drugs: Possession of Ketamine, LSD, peyote, and psilocybin are all considered Class 1 felonies in Illinois, and also carry a prison sentence of four to fifteen years with up to a $200,000 fine.

Marijuana and hashish: Marijuana and hashish carry several different penalties depending on amount and number of offenses. While possession of anything under 30 grams is considered a misdemeanor, this does not apply to third and fourth time offenders. In addition, anywhere between 30 and 500 grams can result in one to five years behind bars, as well as the fines.

Cocaine and substances containing cocaine: Cocaine is another drug that is heavily controlled in the State of Illinois, and is similarly categorized and penalized to heroin when found in one’s possession.

In 2013, the National Survey on Drug Use and Health concluded in its 2012 drug use in America study that 23.9 percent of the entire population over the age of 12 "had used an illicit drug during the month prior to the interview." Not only was this an increase in the overall drug use statistics, but also in increase in the percentage the rate grew as well.

A drug arrest, charge, or conviction can have broad implications for you financially, socially and legally. If you or someone you know is facing charges related to a drug offense, please seek the assistance of an experienced Arlington Heights drug crimes defense attorney as soon as possible. Located in Arlington Heights and serving Cook, Lake, DuPage, and McHenry counties, Scott F. Anderson Attorney at Law can assist you in all of your criminal law matters.