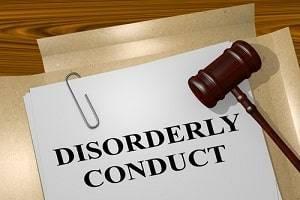 In Illinois, some laws can be somewhat vague, such as reckless driving laws. Under these laws, it is up to a judge and perhaps a jury to determine what “reckless driving” actually is. Similarly, Illinois’ disorderly conduct laws act as a sort of “catch-all” for obnoxious or alarming behavior. What some may consider to be a fun and crazy night out could be considered a breach of disorderly conduct. Although the disorderly conduct statute specifies certain behaviors that can be charged as such, the final decision is still left up to the judge most of the time. Therefore, it is important to learn what behaviors or actions may constitute disorderly conduct in Illinois in case you ever face these criminal charges.

What Is Disorderly Conduct?

The disorderly conduct statute also names specific behaviors that are prohibited, including:

If you are charged with and convicted of disorderly conduct because you allegedly disturbed the peace, you will be charged with a Class C misdemeanor in Illinois. A Class C misdemeanor can carry up to a 30-day prison sentence and fines between $75 and $1,500. For more serious cases, depending on the specific behavior and whether or not this is your first disorderly conduct charge, you could face up to a Class 3 felony. In addition to any criminal charges or penalties that a judge orders, you will also be sentenced to between 30 and 120 hours of community service unless you are sentenced to a period of incarceration.

When you are charged with a rather subjective crime such as disorderly conduct, it only makes sense to fight the charges. It is harder for the prosecution to prove this type of criminal charge because of its subjectivity, giving you a better chance at a lesser sentence if you are convicted. Scott F. Anderson, Attorney at Law has more than 25 years of experience in the criminal law field, and he can help build a solid defense against your disorderly conduct charges. Call our skilled Rolling Meadows, IL disorderly conduct defense lawyers today at 847-253-3400 to schedule a free consultation.