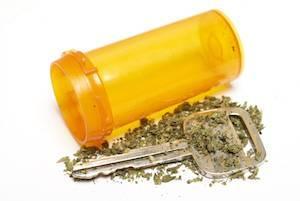 In most states, the legal threshold to be considered under the influence of alcohol is having a blood-alcohol concentration of .08 or more. Like the BAC limit, there is a limit as to how much THC (the psychoactive ingredient in cannabis) is permitted to be in your system while you are driving. In Illinois, you are legally considered to be under the influence of marijuana if you have a THC concentration of five nanograms or more per milliliter of blood or 10 nanograms or more per milliliter of a different bodily substance.

If you are convicted of a DUI while under the influence of marijuana and this is your first DUI offense, you will be charged with a Class A misdemeanor. This means you could face up to a year in jail, $2,500 in fines, and a driver’s license revocation of one year. If you were found to be under the influence of marijuana while driving or you had marijuana in the vehicle with you and you are not a medical marijuana patient, you can also be charged with possession of a controlled substance.

Any DUI charge is a serious matter. That includes being charged with a DUI while under the influence of marijuana. For help, trust a knowledgeable Arlington Heights, IL marijuana DUI defense attorney with your case. Scott F. Anderson, Attorney at Law has years of experience successfully defending clients accused of driving under the influence. Call our office today at 847-253-3400 to schedule a free consultation.