What Are My Rights if I Am Stopped at an Illinois Sobriety Checkpoint? 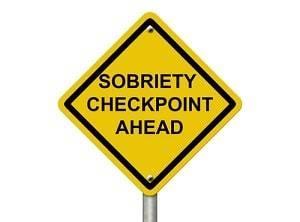 Driving while under the influence of drugs or alcohol (DUI) is a serious criminal offense that not only puts yourself in danger but risks the lives of others as well. This is why law enforcement puts so much effort into reducing the number of drivers who commit DUI. One of the techniques police officers have found that is effective in catching DUI offenders is by using sobriety checkpoints. Although the constitutionality of sobriety checkpoints has been debated, they have repeatedly been deemed legal and not in violation of the Fourth Amendment by the U.S. Supreme Court. If you are facing DUI charges as a result of being stopped at a sobriety checkpoint, it is crucial that you understand your rights.

Law enforcement personnel are permitted to conduct sobriety checkpoints at any time or place of their choosing, but there are a few rules that they must follow in order for a checkpoint to be legal. If police plan to establish a checkpoint, they are required to inform the public of the time and place of the checkpoint. They are not allowed to conduct a checkpoint at a location where it would cause a traffic jam or put drivers in danger. They must also use signs or lights to signal to motorists that they are entering a DUI checkpoint. In addition, all police officers and vehicles must be clearly marked.

Your Rights at a Checkpoint

The first thing to know about sobriety checkpoints in Illinois is that you do have the right to avoid the checkpoint. The requirement that the DUI checkpoint must be announced prior to the administration of the checkpoint is one of the ways you can avoid going through the checkpoint. However, if you do choose to drive through a checkpoint, you have the same legal rights as any other person who has been pulled over by police, such as the following:

Illinois drivers have the right to avoid going through a sobriety checkpoint. A conviction for DUI can result in serious consequences that include losing your driving privileges, hefty fines, and even jail time in some cases. If you or someone you know is facing DUI charges, you need a skilled Arlington Heights DUI defense lawyer on your side. Scott F. Anderson, Attorney at Law has helped numerous clients deal with drunk driving charges, and he has the legal knowledge you need to help avoid a conviction or minimize the potential consequences you may face. To schedule a free consultation, call our office today at 847-253-3400.