What Are the Consequences for Violating Scott’s Law in Illinois?

Posted on November 5, 2019 in Traffic Violations 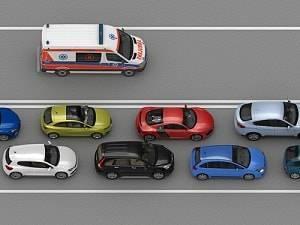 Every motorist in Illinois is required by law to move out of the way when an emergency vehicle is coming down the street. If you do not move, then you may be issued a serious traffic ticket. What some people may not know is that you are also required to move to the farthest lane if you approach an emergency vehicle that is stopped on the side of the road. This is called the “Move Over” law, and it was created to attempt to prevent harm from coming to police officers and other emergency workers when they are responding to a call.

What Is Scott’s Law?

The Move Over law is also known as Scott’s Law, and it is named after Lieutenant Scott Gillen of the Chicago Fire Department, who was struck and killed by an intoxicated driver when he was helping at the scene of a car accident on a Chicago expressway. Scott’s Law states that when an authorized emergency vehicle gives a signal or displays flashing lights, all drivers must make an effort to change lanes to one that is not next to the emergency vehicle or reduce their speed and proceed with caution if changing lanes is unsafe or impossible.

Technically, violating Scott’s Law is not a criminal offense, but rather a traffic offense. As of Jan. 1, 2020, anyone who violates the law will face a minimum fine of $250 for a first offense and a second offense can result in a $750 minimum fine. Depending on the circumstances, a maximum fine of $10,000 may be issued to a driver who violates this law. This fine does not exclude the possibility of also being charged with other crimes, depending on the circumstances. If another person’s property was damaged because of the violation, the offender faces a driver’s license suspension of 90 days up to one year. If a person was injured because of the violation, the offender faces a license suspension of 180 days up to two years, and if a death occurs, the license will be suspended for two years and the violator can be charged with a felony.

While a Scott’s Law violation typically results in a fine and/or a driver’s license suspension, you can very easily face additional charges, depending on the circumstances of your situation. If you have been issued a traffic ticket, or if you have been accused of violating Scott’s Law, you should get help from a skilled Arlington Heights, IL traffic ticket defense lawyer. Scott F. Anderson, Attorney at Law has been helping clients defend against traffic violations for decades. Call our office today at 847-253-3400 to schedule a free consultation.