Gilberto Vanegas, 62, of Chicago was "charged with driving under the influence of alcohol, traveling in the wrong direction and failure to reduce speed to avoid an accident," according to a police press release and as reported by the Chicago Tribune. Vanegas was apprehended in a 2007 Chrysler minivan on I-90 after his van stopped just short of an Illinois Department of Transportation snowplow. If the snowplow hadn’t been out on the road it’s likely that Vanegas wouldn’t have slowed or stopped at all. His minivan did strike a retaining wall several times before coming to a stop, however, according to the Chicago Tribune. 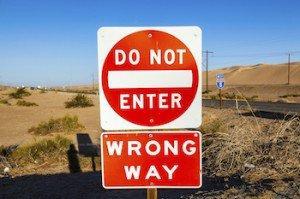 According to a publication issued by the National Transportation Safety Board (NTSB), "wrong-way collisions," such as one Vanegas could have caused if he hadn’t been stopped by the snow plow, "account for only about 3 percent of accidents on high-speed divided highways, but they are much more likely to result in fatal and serious injuries than are other types of highway accidents." One study conducted by the Virginia Department of Transportation found that the fatality rate for wrong-way collisions is up to 27 times higher than other types of accidents.

"A substantial proportion of wrong-way drivers are impaired by alcohol," the NTSB reports. Between 2004 and 2009, there were 1,566 wrong-way drivers counted. A vast majority (936) of these were reported to have had indications of alcohol impairment. Of the 1,808 right-way collisions that were counted in the same time period, only 126 of them involved alcohol-impaired drivers. Nearly 60 percent of wrong-way, alcohol-impaired drivers had a blood alcohol content of more than .15.

If you have been charged with a DUI in Chicago, the most important step is to seek legal counsel. Contact Scott Anderson Attorney at Law today.